The View from Up There: LOJIC Donates to U of L Archive 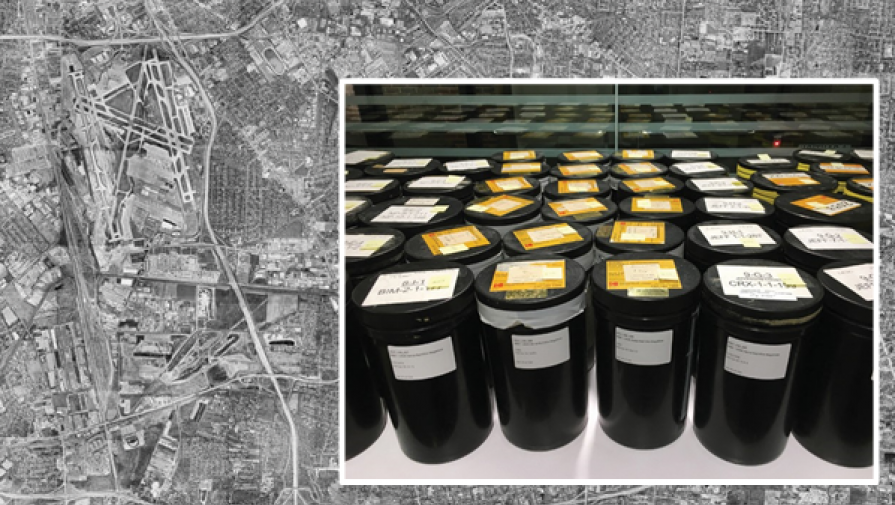 Aerial photography of Jefferson County dating from 2000 to 1946 is available for viewing at the University of Louisville Archives & Special Collections following a donation by LOJIC of more than 100 canisters of negatives.

Want an aerial view of Louisville? Technology has rendered this possible with just a click of an app on your phone. But where satellite technology has simplified the process and made it possible for almost anyone, back in the day, things were slightly more complicated.

“During the Civil War era, cameras would be carried in balloons,” said Jane Poole, a GIS Solutions Analyst for the Louisville/Jefferson County Information Consortium (LOJIC), which builds and maintains a Geographic Information System (GIS) for Jefferson County. Poole said photography is needed to ensure precision mapping of the area. As technology advanced, so did the method of photography, with cameras mounted on planes eventually taking over the task, traveling along flight lines to get maximum coverage.

The cameras produced nine- by nine-inch negatives that overlapped so you could “see in stereo,” Poole said. LOJIC has maintained the GIS for Jefferson County since 1986.

When Park Aerial, an aerial survey company, was bought out and closed, LOJIC was contacted about dozens of canisters of negatives  in storage. The negatives dated from 1946 to 2000, encompassing much of the growth of Louisville and Jefferson County. Poole said that while the information was valuable, storage would be an issue: the negatives needed to be preserved in a controlled environment, with sufficient space for the size of the rolls. Poole said that presented an issue for LOJIC, which didn’t have the room or the resources for storage. “The negatives needed long-term storage,” Poole said. “Somewhere with more access.”

Enter the University of Louisville Archives & Special Collections. Poole said LOJIC reached out to the university to see if it would be interested in accepting the negatives as a donation for the archives. Elizabeth Reilly, curator of Photographic Archives, said the negatives were a perfect addition for the archives. “This is a rather significant donation, and the material is valuable to researchers,” Reilly said. “It’s a miracle that it still exists.”

Reilly said the 104 canisters of negatives spotlight the changes in Louisville and Jefferson County. “What you really see is the growth of suburbs, and the development of the county as a whole,” she said. The images offer a literal bird’s eye view to decades of change, usually looking down at bare trees since photos were normally taken in March or April before trees leafed out.

Databases have been created for the negatives, but for anyone interested in an aerial view at the county’s history, you will need to physically visit the archives on the university’s campus. Due to expense, the negatives haven’t been digitized and made available on the website yet, and Reilly said it may be a while before that becomes an available option. “But you can come to Archives and pull the negatives, and look at them here,” she said.

This article is from the September 2018 MSD Current News.